Time: 2019-04-29 Category: Company News Tag: A Donation Book Ceremony Yingjisha School
Summary: In response to the call of the Propaganda Department of the Jining Municipal Committee of the Communist Party of China and the Jining Women’s Federation’s “Initiative for the Growth of Yingjisha Books to Promote the Donation of Books to Yingjisha County Primary and Secondary Schools”,

In response to the call of the Propaganda Department of the Jining Municipal Committee of the Communist Party of China and the Jining Women’s Federation’s “Initiative for the Growth of Yingjisha Books to Promote the Donation of Books to Yingjisha County Primary and Secondary Schools”, the China Transport Women’s Committee and the China Transport Office recently issued "The Proposal for the Donation of Yingjisha Books to Help Growth" to Donate Books to Yingjisha County Primary and Secondary Schools has received positive response from the majority of cadres and workers. On the afternoon of April 29, China Transport held a charitable donation activity for the “Engagesha Books to Help Growth”, Qu Qing, Chairman of China Transport, Li Zhenbo and Fan Peigong, Executive Deputy General Manager of the Group, and Guan Chenghui, Deputy Secretary of the Party Committee of the Group. Leaders attended the donation ceremony.

It is reported that Yingjisha County of Xinjiang is a county and district supported by Jining City. With the strong support of the state and aid provinces and cities, it actively carries out the national common language teaching and the Chinese excellent traditional culture into the campus. All primary and secondary schools realize Mandarin teaching. At present, due to the large number of students in the county, the small amount of books in the school, the students' access to knowledge is mainly textbooks, and the national language books used by various teenagers are extremely lacking. Therefore, the city organized the donation of “Emotional Yingjisha, Book for Growth” Activities, mobilize the city's vast number of cadres and workers, industries, schools to donate books for students in Yingjisha County. 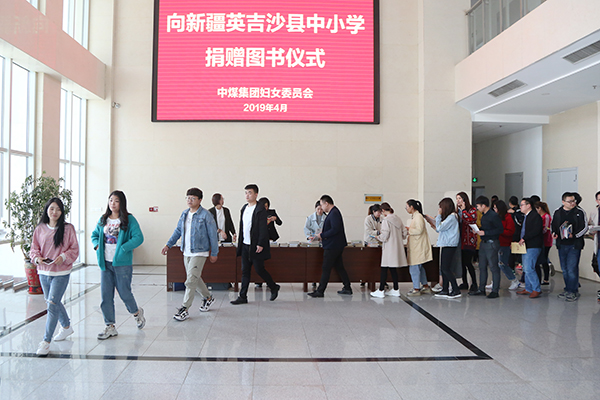 The donation activity was highly valued by the group leaders. The group quickly set off a love boom. The employees of various companies and departments actively participated in the donation. Up to now, more than 1,000 books and magazines suitable for young people have been collected. The staff worked hard to organize the books, sorted and packaged them, and the love books will be sent to the Jining Women's Federation in a unified manner, and sent to Yingjisha in a unified way, with love for the children of the frontiers of the motherland to support a blue sky of knowledge.

Books are the carrier of knowledge, and donation is the expression of love. Through this book donation activity, all the cadres and workers of the group were well guided to express their concern and help to the students of Yingjisha in primary and secondary schools. Through the transmission of love, the idle books were re-valued and the employees were enhanced. Caring awareness also fully reflects that China Transport is a company with a high degree of social responsibility. This high sense of social responsibility will also win the respect and trust of the society!

Next: China Transport Is Invited To Participate In The Donation Ceremony Of Jining City Women’S Federation’S “Emotional Yingjisha Book For Growth”